So what’s the difference between the 2012 Euro (and previous) and the 2016 Euro in France this year? You’re spot on, you may get blown up at this one. France just released a smartphone app to send notifications to users’ smartphones about what’s happening, you know terrorism related, and how to react. Do you still think this immigration is going well? Are you diverse enough yet?

Soccer is a huge sport in Europe and without a doubt, every 4 years, there is going to be a large security presence. Just a tiny difference this time around will be that it’ll be the largest security presence at a sporting event of police and military in recent history, because well, bombs and stuff.

Go look at the wikipedia page for the UEFA European Championship and go to the details of each tournament. Notice the difference? Yah, there’s a section called “controversies” on the 2016 page.

This year at the UEFA Euro Championship, the police, military and emergency services are having mock soccer matches with fake suicide bombers to mimic blowing people up in the crowd, along with up to 30 other mock terrorism scenarios across France, including chemical, bombings and biological gas attacks.

Does this sound like “your country”? Do you want to deduce your own conclusion that stems to something else other than Islamists? Don’t be silly, I know you can’t, it was rhetorical.

I’m not sure if you’ll be able to unlock your phone in a couple days time since you maybe looking around for your arm, but since you’re still in one piece now, you can get the app in the iTunes store in French, and here in English. And if you’re weird and use an Android you can get it here

You can also keep track of the Ramadan bombathon below. It’s a tight race so far, but those pesky Islamists are winning: 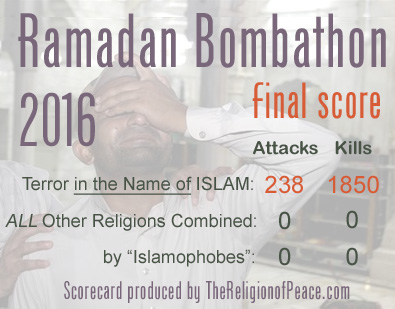 Anyways folks, stay safe! I hope you don’t get a single notification from that app.

Do you people comprehend words? -> Trump’s comments about Gonzalo Curiel

ABOUT US
Causing Debate is a news site about various topics. We're just a couple guys with opinions.
Contact us: [email protected]
FOLLOW US
© CD 2016